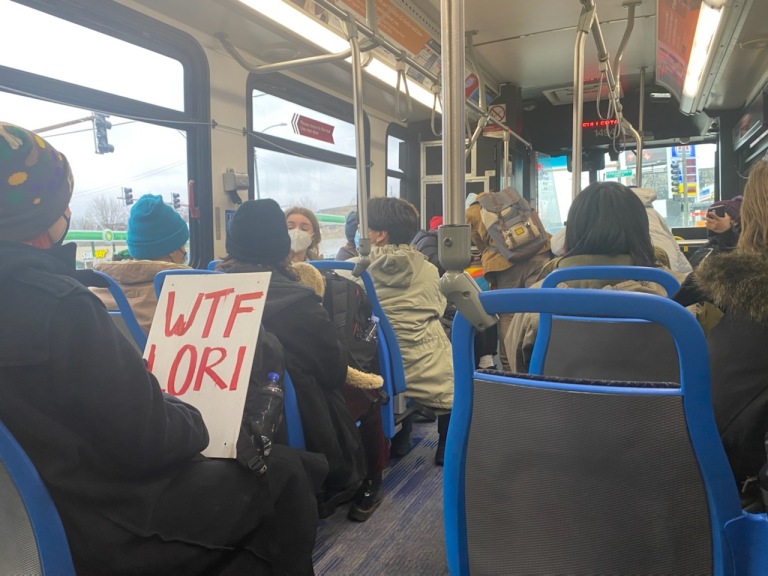 Lane students on the way to CPS headquarters on Jan. 14th.

Students walk out on Jan. 14, highlighting power of student voice, lack of safety in CPS

The regular midday commuter could be forgiven for double checking the time. It was an unusual crowd on the southbound Western express bus from Lane on Jan. 14.

But no – it was around 12:45, and the group of high schoolers, toting signs and chattering with anticipation, took up the first half of the bus, well aware of the classes they were missing.

The students were part of a walkout organized by a recently founded activist group known as “Chi-Rads,” (rads for radical) a coalition of CPS student-activists who feel their voices have been drowned out in the rancor of the most recent Chicago Public School (CPS) and Chicago Teachers Union (CTU) conflict, and want to advocate for an online return, greater health measures and social supports.

One sign was crafted from a poster plastered around Lane by the Chicago Department of Public Health urging students to wear their masks amid a Pandemic. The other side, scrawled in crimson sharpie on white cardboard, read “What the F*** Lori?”, a reference to Chicago Mayor Lori Lightfoot. Another student proudly proclaimed that they bound their own makeshift sign together with chewing gum.

The student who made the ‘Lori’ sign, a sophmore, said they made it because of how the mayor “threw a fit, and didn’t want to be seen losing to the teachers again.”

They continued to say they felt that the district is making students learn in person even though schools are unsafe, and “not actually providing safety measures like N95 masks” (which the Teachers Union has called for) along with staffing shortages. After months of only distributing cloth masks, CPS began distributing KN95s at the beginning of last week, though not all schools have received the same amounts and others are still awaiting shipments.

The Lane students on the bus were heading downtown to CPS Headquarters at 42 W. Madison to gather with other student protestors from many corners of the city, an action which had been quickly diffused through Chi-Rads social media channels within a matter of days.

Katie Hurlike, a sophomore, said they heard and talked about the rally in their English class.

Prior to the walkout, Chi-Rads held a meeting Thursday night for interested students to coordinate organizing, location and planning. According to a Google Sheet coordinating the demonstration obtained by The Champion, students from about 18 different schools attended, along with other activists, parents and teachers.

One agitator who found their way onto a Chi-Rads organizing spreadsheet wrote “CTU Commie F****.”

While Chi-Rads has expressed support for the CTU, they have maintained that their movement is chiefly a student one.

“We stand on the grounds of supporting our city’s educators, parents, and community members, but most of all, ourselves and our peers,” reads their letter of declaration.

Sophomore Tekla Peterson, making their way downtown on the X49, said they supported their teachers, but that they were “back and forth on the CTU.”

An information sheet shared prior by organizers of the Lane walkout says that demonstrators needed “both CPS and CTU to listen to our students.” It continued to say the walkout will be “an opportunity for news coverage, for our voices to be heard, and to get the attention of officials of our district and city.”

“I hope that this walkout makes CPS Leadership realize that students’ voices should be listened to,” senior Isabela Ávila, one of the Lane organizers, told The Champion via direct message.

Ávila herself cannot speak for the CHI-Rads, but supports the CTU.

“I completely support CTU to make decisions best for their teachers, students and the rest of the school community,” she said.

In a later interview with The Champion on an El platform on the way to CPS Headquarters, Àvila said that she also thinks that the 56% CTU vote for a return to school should be reconsidered, especially with a surge in COVID cases.

As of Jan. 22, CPS has recently come under fire from concerned stakeholders for changing their models for reporting cases without notifying the general public. On Jan. 4, the day that CPS-CTU relations frayed enough for the district to shut school down, the district stopped including “non actionable cases” or cases from people who had not been in a CPS building while infectious or for whom 10 days had passed since they had been in school,  along with cases that had been self reported and not confirmed by a contact tracer, on the COVID-19 dashboard.

Detractors claimed this change was meant to implant a false sense of security in parents wary about sending their children to school.

Ávila pointed to Lane’s size, and the subsequent difficulty of social distancing, as a problem. Aaron Bacon, also a Lane student, cited some students improperly wearing masks (such as below the nose) as another concern.

According to CDC research, “staff-to-student and student-to-student transmission are not the primary means of exposure to SARS-CoV-2 among infected children,” and that high spread in schools tends to be correlated with high spread in a wider community.

The research also goes on to say that there is evidence to indicate that “SARS-CoV-2 might spread more easily within high school settings than in elementary school settings.”

As for whether the walkout would accomplish anything, Katie Hurlike was hopeful.

“It could show that it’s not only the parents who are sick of it [conflict], but students too,” Hurlike said.