The whimsical and wondrous joys of Christkindlmarket 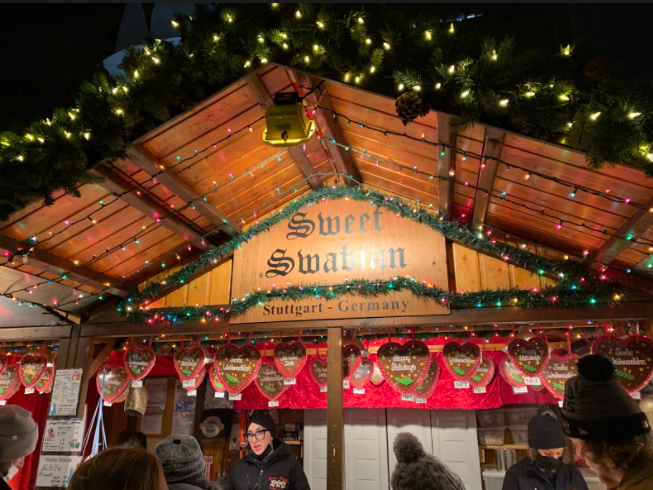 Beautifully decorated booth at the market

‘Rockin’ around the Tannenbaum at the Christmas party hop.’

Bet you’ve never heard that lyric before. That’s because Tannenbaum is the German word for ‘Christmas Tree,’ and in Germany, Christmas is a big deal.

Though Germany is thousands of miles from Chicago, Chicagoans can still experience the joys of a German Christmas with the traditional German Christmas market — Christkindlmarket — downtown at Daley Plaza.

When I first arrived at Christkindlmarket, the first thing that caught my eye was probably the long line which took about an hour to get inside the venue.

Waiting in line was not so bad though, with the decorations placed around the outskirts of the market, such as a life-size nativity scene, 20-foot menorah and trees covered in twinkling Christmas lights. The delectable scents of bratwurst, hot cocoa and warm roasted nuts filling the air did make waiting in line just a little bit of a challenge.

Once inside the venue, after crossing through the awning decorated in Christmas lights, I was greeted by brown wooden huts covered with red and white roofs. The small huts were lined up one after another, with crowds bustling around and gleaming lights everywhere. Each booth had its own unique little knick-knacks or tasty food and treats. A dazzling display for all five of the senses.

Surrounding me were other people dressed in their winter attire, shivering in the cold and clamoring around the neighboring booths to get a look.

It was hard to get too far though, with the smell of bratwurst wafting through the air, luring me in like a siren.

Along with the bratwurst, I got a cup of hot chocolate topped with whipped cream in a Christkindlmarket souvenir mug. The bratwurst was overall tasty, and the warm hot chocolate soothed the body from the bitter early winter air.

Next, I continued alone with the flow of the crowd until I came across a booth selling beautiful and vibrant paper lanterns. The ornamental designs from the lanterns illuminated by the light bulbs inside of them gave the most captivating sight for my eyes to behold.

Right next door to the lanterns was a booth selling marvelous chocolate confections. The temptation was too strong and I gave in, purchasing some chocolate covered strawberries on a stick.

After I refueled with the delicious food, I finally made a lap back around to purchase a final gift, a handcrafted bamboo necklace. There was so much more to explore at the market, but I didn’t get a chance to stop by every booth to see what each one had in store.

From scrambling to find parking downtown, walking ten minutes to Daley Plaza from a parking lot, waiting in line for an hour and squeezing through crowds of people in the bitter cold, Christkindlmarket completely tired me out.

Overall, though, it was a joyous experience and ignited the Christmas spirit inside me. But there were some downsides. The huge crowds and long line could leave some visitors feeling smothered or anxious.

All the gifts are beautiful and artisanal, but since many are handcrafted, attendees should expect to pay a little bit extra. Also, many of the food booths are cash only.

It can get very cold outside — it is December in Chicago. So anybody who is prone to sickness or can’t withstand the cold easily should come either bundled up or avoid the market in favor of an indoor event, such as Navy Pier’s “Light Up the Lake.”