Open Mic: a space for Lane artists to share their work without ‘feeling like they have to be perfect’ 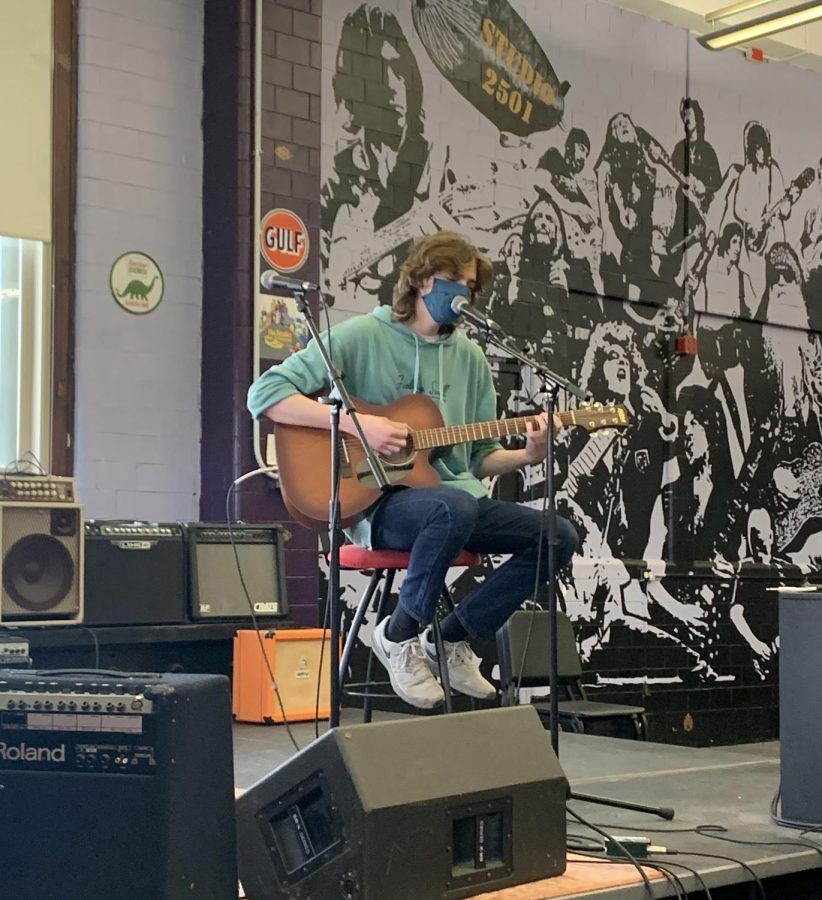 Jonathan Sides, a senior, sings at the Open Mic on March 4.

Senior Nathan Ellis, who goes by “Nate Vintage” on the stage, is an aspiring MC and producer.   Thanks to Open Mic, he can practice his talents at school.

“I did the Open Mic just to further hone my skills,” Ellis said. “I just want to make myself a better performer, lyricist, everything.”

Ellis recently performed a hip hop set at Lane Tech’s Open Mic on March 4, a monthly gathering in Room 154 where students can practice performing in front of a live audience.

“It’s really meant to be a place where anyone can come and share what original creations they’ve been working on,” said Miles Comiskey, the Sound Engineering, Advanced Music Production, Hip Hop, and Music Theory teacher who organizes the monthly gathering in Room 154.

He describes Open Mic as a welcoming space for Lane artists to share their work without “feeling like they have to be perfect.”

These gatherings have been going on at Lane for about four years. Monthly sessions were halted during the pandemic, but have returned this year in full swing.

Student performances range from original music to poetry. Some students have formed bands and collaborated with each other after meeting at Open Mic, according to Comiskey.

“It’s really cool to see it grow from individuals to a community of people making music together,” he said.

Lupe Mendez, a junior, opened up the March Open Mic by singing a song in Spanish. She’s interested in pop and Latin music, and said that she’s more comfortable trying new things with her music because of the environment at Open Mic and music courses offered at Lane.

“Because we’re such a large school, there’s so many genres that people are into and we can see that in the Open Mic,” Mendez said.

Students also feel more at ease performing because if someone messes up, audience members encourage them by cheering them on, according to Comiskey.

“There’s less pressure,” he said. “I think it lets people be a little bit more vulnerable and not feel like they have to be perfect.”

Another part of why Comiskey thinks having Open Mic is important is because when he was a young singer-songwriter, he didn’t have many opportunities to perform. Before he started putting together his own shows, he would go to an Open Mic downtown at a cafe.

“In a lot of ways, I wish that I had this when I was in high school,” he said. “That’s actually how I think about a lot of things in my teaching: What would I have wanted when I was a younger musician?”

Jonathan Sides, a senior, told the crowd at this month’s Open Mic that he signs up for these events to motivate himself to finish writing his songs. He said he wrote the lyrics to the song he performed at 1:30 a.m.

Comiskey said a lot of students from his advanced music classes attend, but every month he also sees new faces.

“We’re always trying to get the word out to more people, not just for performers,” he said.

Z Boyd, a sophomore, was another singer at this month’s Open Mic.

”I have always enjoyed this community and finally built up enough of my own self confidence to be able to perform in such a small area,” they said.