‘Cheer’ Season 2 will have you flipping out of your seat 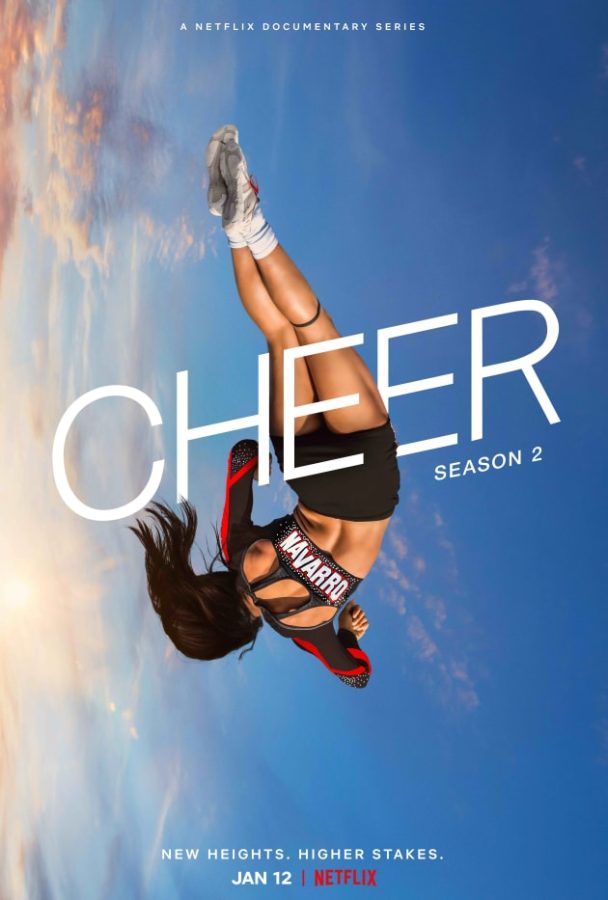 After the inspirational first season of “Cheer,” featuring Monica Aldama’s 14-time National Champion Navarro College cheer team in Corsicana, Texas, fans were thrilled with the announcement of season two, but this season covered more complex issues compared to season one.

Similar to the first season in 2020, the second season begins by focusing on Navarro’s preparation for Daytona 2020. Daytona is the National Cheerleaders Association & National Dance Alliance Collegiate Cheer & Dance Championship, which is the only competition Navarro cheerleaders and Trinity Valley Community College (TVCC) compete in. However, unlike season one, which briefly mentions TVCC, the second season holds a heavy focus on TVCC.

This is done by portraying TVCC as the underdogs, which fuels the rising tension between the schools.

However, the rivalry between them was cut short in 2020 when the pandemic struck, leading to the cancellation of Daytona.

The show accurately captures people’s feelings about the pandemic. Before the official quarantine began at Navarro, team members said that they only believed quarantine would last two weeks, which I am sure most people would agree with. No one would have believed the damage a virus could cause to everyone’s lives so suddenly. The show conveyed this by featuring team members who were left alone in their dorms with no family, friends, or cheer.

Following the episode dedicated to COVID-19, which showed athletes stuck inside their dorms, was the introduction of Jerry Harris’s case. A once fan favorite now had sexual assault allegations tied to his name.

Harris was a Navarro athlete and fan favorite because of his famous “mat talk,” which hyped up his fellow team members at Navarro cheer. The show catapulted him into the eyes of adoring Americans, leading to special guest appearances on “The Ellen DeGeneres Show” and a role as an Oscars correspondent before the allegations came.

The show handled the situation very well; the episode was centered on the victims, twin boys who were 15 at the time of the assault. It gave the victims a chance to reveal their truths, which tied back to the deeper rooted problems athletes face in cheer and dance with assault and harassment, and how large corporations, like Varsity Brands, who monitor these events, are not doing their job effectively.

Additionally, the show also features the media attention team members gained since season one, yet it still brought forth drama.

But the most notable increase in media attention would be Coach Monica Aldama, who discusses her experiences with fame since season one.

It was nice to see another side to Aldama because in season one she is portrayed to be all work, no play. She is tough on her team members, always pushing them. Season two showed her more supportive side. She embodies tough love, so to see Aldama having fun with new opportunities, like being on “Dancing with the Stars,” was very exciting to watch.

The season ended by focusing on Daytona 2021, which brought the show back to its original purpose, to show Navarro working towards its ultimate goal: winning.

Although the production surrounding Daytona 2021 was not as neatly packaged as it had been in the first season, it was overshadowed by broader topics mentioned earlier in the season: worries about COVID-19, allegations for Harris, handling fame, and more. This caused viewers’ attention to be spread thinly across the various topics. And constant transitions between Navarro and TVCC’s perspectives only contribute to a messier plot. But constantly changing focus of the story can keep viewers engaged, especially with the lead-up to the scores being released.

Leaving the viewers with the ultimate question: who will win Daytona 2021, Navarro or TVCC?

The suspense present throughout the season, and especially the last episode, will keep you on the edge of your seat. The rivalry between teams will push you back and forth between who you should root for. But most importantly, the raw emotion in this season will pull at your heartstrings, which is new and valuable in comparison to season one which lacked emotional range.

So the next time you are browsing Netflix and looking for a show that will keep you engaged, sit back and try to relax because “Cheer” will take you for a tumble.