The Lane Tech Champion • May 9, 2022 • https://lanetechchampion.org/13149/features/seniors-reflect-on-changes-in-the-college-admissions-process/

Seniors reflect on changes in the college admissions process 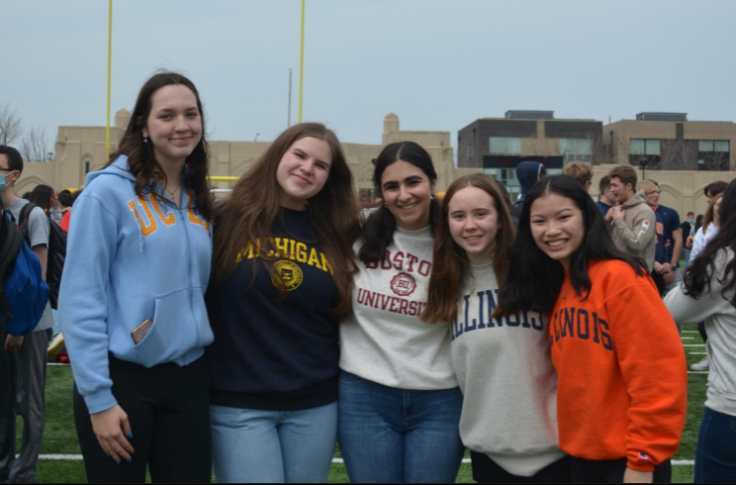 Caroline Meyers, div. 278, wanted a big school, lots of diversity and a new environment for her future college. She found this at the University of California, Los Angeles (UCLA), which quickly became her dream school.

However, the lasting effects of COVID would make this admission cycle more difficult for all seniors, even those who knew exactly where they wanted to go.

Meyers has been interested in UCLA since the summer of 2019. According to Meyers, she was on a trip to California and stopped by the school to do an unofficial tour.

“I knew that I want[ed] to go to school in California, but specifically UCLA as I really enjoyed it, and I think they have programs that appeal to me,” said Meyers.

Meyers having a dream school in mind did make certain aspects of her admissions process easier.

“It helped me know what I wanted to look for in a school beyond UCLA, like what appealed to me about other schools I was also considering,” said Meyers.

But, Meyers wasn’t able to visit many other colleges because of the shut down of in-person tours due to COVID.

“It’s important because there have been schools that I thought I would really like, and then I toured and it just didn’t really match the vibe I thought it was,” said Meyers.

Although one positive that came from COVID shutting down in-person tours was a new online feature that various colleges implemented: 360-degree online tours.

As reported by Inside Higher Ed from March 13, 2020, to April 13, 2020, 1.4 million people viewed virtual campus tours. Additionally, in 2020,  539 colleges began partnering with virtual tour companies like EAB (Education Advisory Board) to make 360-degree tours possible, according to Inside Higher Ed.

“A lot of schools then opened up their online tours, but obviously that’s much different than going in person and seeing it,” Meyers said.

Not being able to visit colleges also had a domino effect on most seniors that led them to apply to many more colleges in comparison to a normal admission cycle, according to Erin Dreisbach, Lane Tech’s College & Career Coach.

In fact, the amount of total applications submitted has increased by 22% percent in comparison to before COVID according to the Consumer News and Business Channel (CNBC).

“I think a lot of seniors applied to a lot of colleges and might’ve overcompensated by actually finding more schools because you weren’t sure where you wanted to go,” Driesbach said.

Changes with standardized testing, like colleges removing requirements for SAT and ACT testing, also added a level of confusion for seniors this year. This made it harder for seniors to find their match schools, according to Driesbach. Colleges removing testing requirements meant more seniors falling in the range of various colleges. Ultimately leading to a much higher applicant pool this admission cycle, which Driesbach hopes to prevent in the future.

“I hope that in the future students will apply to fewer schools overall and therefore not have these ballooned applicant pools within certain schools,” Driesbach said.

Other seniors, like Mali Sullivan div. 273, dealt with the issues presented by the inflated high applicant pool firsthand.

“I realized like this year, especially right before applications, these changes made it harder to get into a school that’s usually easier to get into because it’s fair game for more students,” said Sullivan.

That said, one benefit of removing requirements of standardized testing was the ability to focus more on grades, according to Sullivan.

“COVID saved my butt because now I don’t have to worry about [standardized] tests, and I just could focus on my grades and my GPA and extracurriculars,” Sullivan said.

COVID keeping people at home also allotted increased studying time but took away vital connections with counselors and in school activities that help with the application process, Sullivan said.

Driesbach also said that there has been an increase in the support given by Lane in the application process this year.

“We also had some colleges visit remotely that normally don’t have the budget to come to Lane in person, so that was an advantage,” Driesbach said.  “Also Ms. Thompson added my role and really added some extra hours for your counselors in order to beef up support this year.”

According to Sullivan, Driesbach was helpful in the college application process from the beginning.

“She sent out updates on deadlines that were coming up when we were applying for colleges back in November/December which was great cause there was a lot of information and materials to keep track of,” Sullivan said. “If my counselor wasn’t available I would go to her about any college questions and she always had an answer or a resource I could use to get my answer.”

However, there were some presentations from Lane this year for seniors that fell short of the timeline. There have been presentations surrounding financial aid and scholarships that were presented after the deadline for many applications.

“There was a presentation on financial aid, and I was like ‘It was too late,’” Sullivan said.

So while COVID may have given current seniors a leg up to their sophomore and junior year by improving their grades, it overall created greater struggles. Between not being able to visit colleges, changes within requirements for standardized tests and presentations done too late to be helpful, seniors faced a lot of challenges with the admissions process this year.