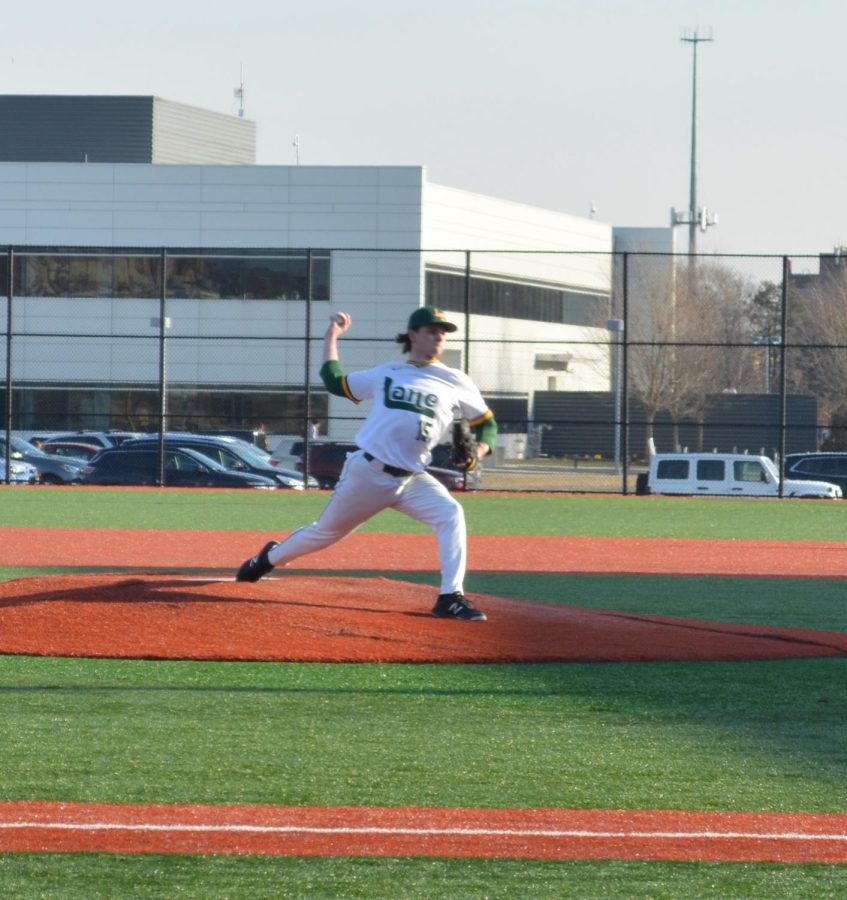 Jacob Maza, who volunteered at the Lane Baseball summer camp, pitching during the 2022 season. "We showed them how a high school team operates," Maza said.

After a month off of volleyball, sophomore Martyna Babiarz, knew she wanted extra practice before tryouts for Lane’s team.

Her solution was to participate in Lane’s volleyball camp.

““I was definitely struggling with hitting before going to the camp, and the coaches really helped me through that struggle,” Babiarz said. “The coach had some more personalized tips during the end of the camp which helped me with my hitting skills.”

The camp, which  ran from July 25-29 and was hosted at Energy Volleyball Complex in Niles, was one of the summer sports camp Lane teams hosted this summer. Lane held camps this summer for baseball, boys and girls basketball, boys and girls volleyball and boys and girls soccer. At these camps, students had the opportunity to participate in a variety of training exercises, from drills to scrimmage games.

Babiarz initially played volleyball at her local park district, but moved to a club this past year and is now looking to join Lane’s team.

“The fact that my brother did [the camp], and it looked cool interested me,” Babiarz said.

Babiarz discovered through an email that the Girls Volleyball team was hosting a camp and decided to register.

The camp gave an inside look at expectations the coaches would have at tryouts, but the most productive part of the camp was getting back into the swing of things right before tryouts, according to Babiarz.

“The most beneficial part of camp was definitely wiping the rust off of skills that haven’t been used since the end of the school year. I got to get back into the routine of volleyball and got back to where I was,” Babiarz said.

Babiarz recommends the camp to students interested in volleyball for future seasons.

“It will get you back into volleyball and allow you to work on skills you struggle with with coaches of the actual team,” Babiarz said.

The training camps didn’t stop on the volleyball court.

Incoming freshman Porter Smartt participated in both Lane’s baseball and basketball summer camps and will join the freshman football team this coming fall.

“I’ve just always wanted to play baseball,” Smartt said, “and then I also joined the football team. Coming to Lane and participating in camps of a high school team is the best way to prepare you and [to] maybe go to college and play sports,” Smartt said.

The camps were a great opportunity to expose yourself to new people who share similar sports interests as well as meet the coaches, according to Smartt.

“I feel more prepared for tryouts because of the camps. You already are not as scared because you already met everyone involved,” Smartt said.

Varsity baseball player Jacob Maza helped lead at the baseball camp Smartt was a part of.

“There were a lot of kids that came out and there was probably about 40 on the last day when I counted,” Maza said. “Obviously that means there’s kids that want to come out and there’s parents that are very interested in sending their kids to Lane for the sports. I think that’s something about Lane, is that we take a lot of pride in our sports.”

Maza wanted to volunteer for the camp not just because he is a member of the team, but to show new athletes what the team stands for.

“We showed them how a high school team operates and how the coaches expect you to perform at the practices and give 100% effort all the time,” Maza said.

At the camp, Maza, amongst other members of the current baseball team, got to run drills and even be coaches of a scrimmage game played at Kerry Wood Field.

“I feel like getting to act as the coach was a way to understand how coaches really give a lot of their time to teaching kids, so they can try to help kids become better at their sports,” Maza said.

While it is true that students will get to be introduced to athletes who share similar sports interests at these camps, they are also meeting their competition for tryouts.

“I think they probably took away the fact that they’re gonna have to compete for a spot on these teams,” Maza said. “They probably saw that there were 40 other kids with them there, plus a ton more that weren’t at the summer camp are gonna show up at tryouts.”

Tryouts are a part of Lane’s cut sports, and the camps are a great way to accustom yourself to the intensity of high schools sports, according to Maza

“The camps let you understand the intensity of our team,” Maza said. “The coaches were not expecting these kids to come out and see it as a joke camp or camp to have fun with their friends. It was a time for them to be serious and really show that they can be both a real good athlete and baseball player.”