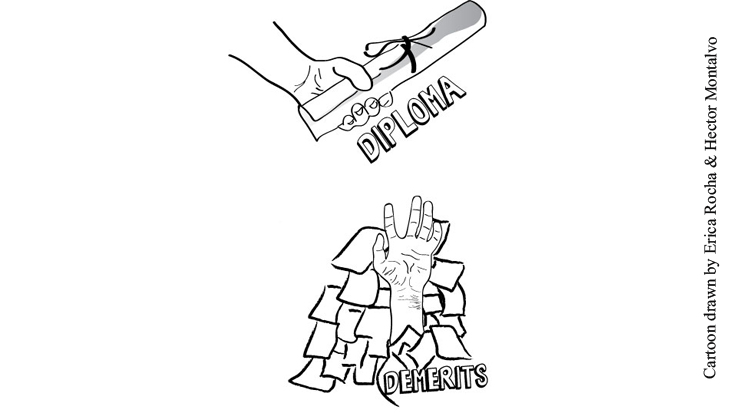 Preparing for International Days is a highlight for many students. They spend time with friends, work hard, and exhibit ethnic pride by showcasing traditional dances performed in native costumes of different countries. However, this experience changes when clubs begin to lose members due to Lane’s new demerit system.

Demerits are given to punish those who are tardy to school or in violation of the dress code. If students accumulate enough demerits, they lose certain school privileges like attending Turkey Bowl, school dances, and even participating in International Days.

Preparation is crucial for clubs preparing for International Days, which starts Mar. 6. Several clubs are now rushing to make changes to dance routines after losing members due to demerits.

According to Korean Club dancer Daniela Rozo, Div. 582, the demerit system has not only affected the choreography of Korean club’s dance, but its budget as well.

“We are limited to 24 dancers, so each one is important to our choreography. The demerit system has just brought us a lot of stress because our president and two of our dancers have been kicked out,” Rozo said. “Our budget got really tight and now, everyone else has to pay extra for the dresses and costumes…we are scared, honestly. ”

“I believe [demerits] are really unfair, like [club members] are late for reasons that are inevitable…they try so hard,” Paulina Rosales, Div. 578, another Korean Club dancer, said.

Some clubs, like Filipino Club, have already replaced dancers who cannot perform because of their high demerit totals, but several members are still stressed about losing additional members who are getting close to accumulating 15 demerits.

“It’s been sort of chaotic,” Miller said. “I knew the moves [to Hawaiian club’s dances] very well and since I can’t perform, the dance moves for Hawaiian Club might not be properly portrayed and I don’t want people who are Hawaiian to possibly be offended. ”

Miller said that he tried participating in the breakfast program to reduce his number of demerits, but it hasn’t reduced his demerits enough to allow him to perform.

“I don’t think the demerit system is fair,” Miller said. “This was my last year to be able to dance and now I can’t anymore. I wish there were more opportunities to reduce the demerits, especially for seniors. It’s not fair to take away fun their last year.”