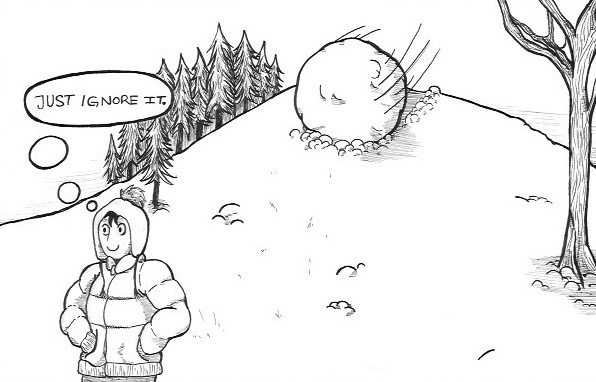 Thinking twice before posting on social media may not be enough anymore, especially if most of your Facebook friends are from Lane.

Students who posted seemingly harmless jokes about the bomb threat made last month probably realized this rather quickly.

Although no one was hurt and everyone was in the same situation, many students reprimanded others over jokes as innocuous as one that suggested the bomb was really a ploy to get students to wear their IDs. Although the joke was not malicious or offensive in its content, the idea of making a joke during such a time struck some students as appallingly insensitive. Many failed to realize some people use humor as a coping mechanism. Ironically, however, it almost seems insensitive and hypocritical to criticize and condemn their way of dealing with the situation.

The very few insensitive jokes made by a small number of underclassmen caused an uproar among the upperclassmen groups; their blown-out-of-proportion response to the joke seemed more inappropriate than the joke itself.

Humor is subjective — so what may be funny to one person may not be funny to someone else. The same goes for offensiveness; what may appear to be perfectly innocent to one individual may be extremely offensive to another.

Thanks to political correctness, the line between funny and offensive has become so increasingly thin, it may not even be existent.

Political correctness (PC) is defined by Merriam-Webster as  “the avoidance, often considered as taken to extremes, of forms of expression or action that are perceived to exclude, marginalize, or insult groups of people who are socially disadvantaged or discriminated against.”

At a time when society is progressing towards equality for all, being PC seems necessary to millennials who strive to be socially engaged in their communities. We put such a great emphasis on feelings today that failing to consider how people of other social groups may react to our actions not only labels us as arrogant, but also racist, sexist, or bigoted.

Some of the most prestigious universities have been in headlines for political correctness.

What starts as scolding students for making harmless bomb jokes ends up creating a fear of expressing one’s voice and a fear of not meeting today’s highly subjective yet peremptory standards of political correctness.

Yale was on the news after an administrator sent out an email stating students were free to wear what they choose for Halloween; some students responded angrily, claiming there must be restrictions on things that can be potentially offensive. The only problem with this demand: a large portion of Halloween costumes can be argued to be sexist, racist, or offensive in some other manner.

Another case of PC extremism occurred at Princeton, where students demanded that Woodrow Wilson’s name be removed from a school building because the former president was openly racist. Anything from Halloween costumes to past historical figures can be offensive, even traumatizing, and this issue extends to so many other social aspects.

One of the most vociferous opponents of political correctness may be the next leader of our country, the now infamous Donald Trump. As inconceivable as it seems to us, we attend a liberal, PC school, and that is why it is so shocking to us that someone so ridiculous and hateful somehow garnered that much support.

While we try to live in a safe, censored bubble where anything offensive is ignored, other people are fed up by our oblivion and the forced avoidance of social conflicts that still need to be ameliorated.

Either way, rather than progressing, the movement towards fair equality will be noticeably regressing, either through the restriction of our freedom of speech or forcing our own citizens to wear tags to identify their religion as Donald Trump has suggested.

As a result, society’s highly sensitized standards push some to repel political correctness.