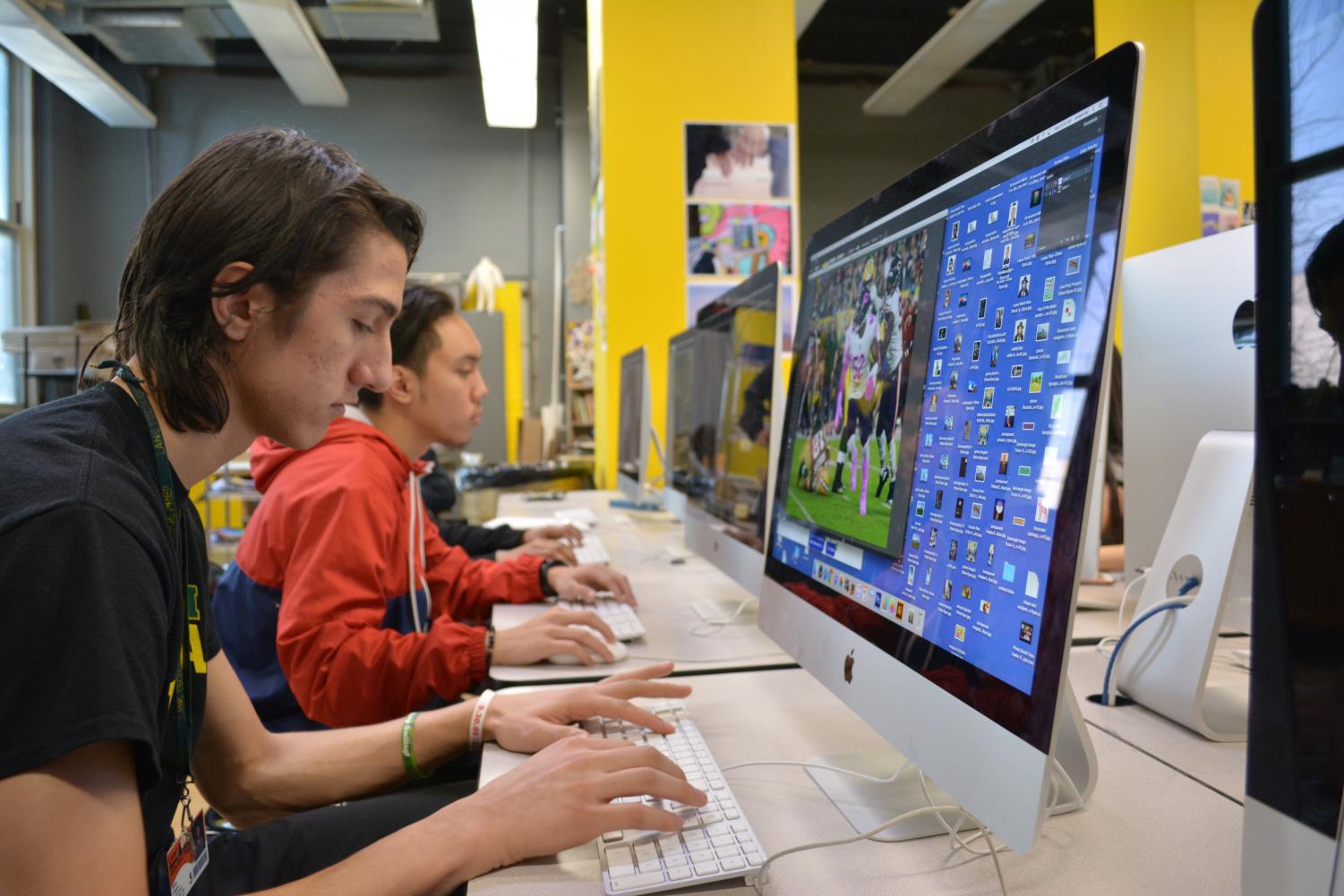 Ethan Ryan, Div. 980, and students in Ms. Diamond’s Digital Imaging I class working on Macs to complete a low-poly project.

The evolution from teenager to ‘screenager’

Walking down the hallway, it is no surprise to see many students navigating to their next class while scrolling on their Instagram feed, responding to messages or checking the General Student News email. Those five minute passing periods add up and can contribute to a greater issue — excessive screen time.

According to the American Academy of Pediatrics (AAP), children under 17 should not be spending more than two hours on a screen per day, including time spent on school work. Despite this recommendation, the average teen exceeds 11 hours of screen time, according to an article published by the AAP.

In a survey conducted by The Warrior, of the 90 responses, the average student spends roughly four hours of their day solely on their phones, which is two hours over the suggested total amount. This time does not account for the time students spend behind other screens, such as scrolling on a laptop or watching television.

Apple recently released a feature with its iOS 12 update called Screen Time, which allows iPhone users to see how long they have spent on their phone, what apps they use most, as well as an option to set time limits for certain features.

Screen Time is intended to help users better manage and understand their time spent behind the screen, according to Apple.

“Screen Time — a new feature of iOS 12 — lets you know how much time you and your kids spend on apps, websites, and more,” according to an article released by Apple. “This way, you can make more informed decisions about how you use your devices, and set limits if you’d like to.”

According to Dr. Gilson, Lane’s school psychologist, screen time in schools does have its pros, such as supplementing a certain lesson in class and increasing functionality in the classroom. The results of The Warrior survey indicate that 64 percent of students use technology as a part of the curriculum in three or four of their classes.

“We have students who are nonverbal and need to use it to communicate,” Gilson said. “In our Cluster program, you don’t have to go far to find a student who uses [technology] as their communication device.”

According to Rush Hospital, extended phone and computer usage have been linked to conditions like cubital tunnel (increased tension in the elbow where the ulnar nerve passes through the elbow) and trigger thumb (constriction of the flexor tendon in the thumb).

Two-thirds of teens believe that they are able to multitask, according to a survey conducted by the Common Sense Media Group. This belief causes schoolwork to not be done effectively as students are not able to equally focus on the tasks they are completing, the WVEA article reported.

James Steyer, CEO of the Common Sense Media Group said in an interview with NBC News that multitasking is impossible and that teens should be taught not to switch back and forth between tasks as it breaks up a fluent thought process.

“I think that’s really the bottom line message is that while technology used wisely, can be an extraordinary learning tool and basic part of our kids’ education, we have to teach kids that they should focus on the learning process and not constantly switch back and forth between Facebook and Instagram and texting and whatever,” Steyer told NBC News.

Gilson recommends a “screen diet” for students looking to reduce their screen time. The “diet” is personal to all students and aligns to the student’s specific needs, as two hours is not a realistic amount of screen time for the average student, according to Gilson.

“Of course, everything in moderation,” Gilson said. “Everyone has to come up with their own screen time diet that works for them.”