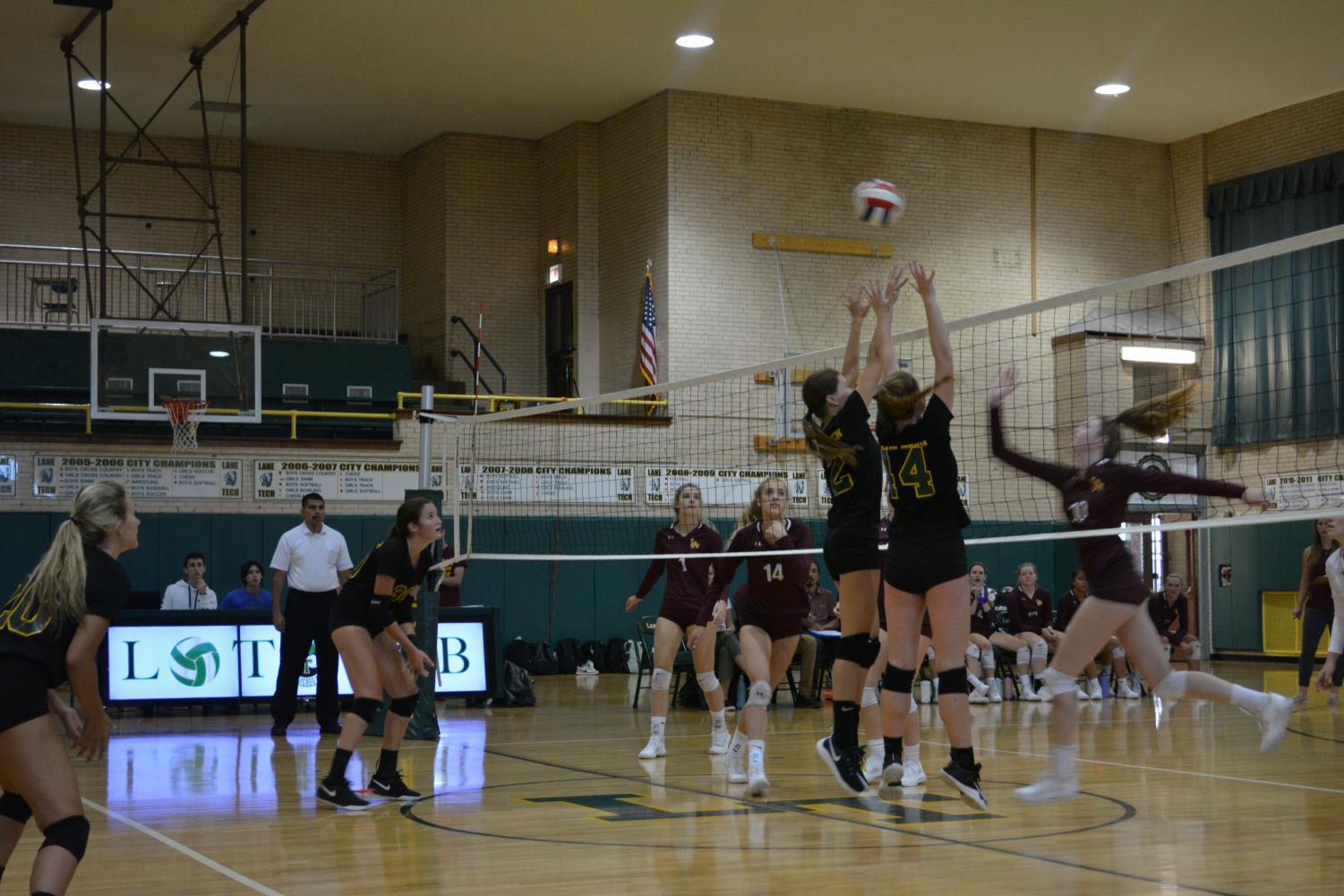 By Glory Lozada and Alex Burstein

After winning a city championship and advancing to the regional finals last year, the Girls Volleyball team has a new look, with a different roster and an improved defense. Lane graduated eight seniors from last year’s team and now has a new challenge ahead of them.

Instead of entering a rebuild, the team is hoping to build off of last year’s success.

“We don’t rebuild,” said Head Coach Pablo Lopez. “We recharge, we reenergize and we reload. We’re ready for battle.”

Lane had their first chance to show off their defense and new roster on Aug. 27 when they competed against Loyola Academy to start off the season.

Following the start of the first set, Lane seemed to be in a tough position as Loyola’s hitters consistently killed the ball. Returning varsity seniors worked in sync to limit the Ramblers’ lead with great digs by outside hitter Ruby Kulovitz, Div. 072, and back-to-back aces by middle hitter Katie Webb, Div. 064, making the score 19-12 in favor of Loyola.

With multiple ups by Kulovitz and consistent serves from returning varsity player Nikki Miller, Div. 176, Loyola’s defense weakened, forcing their coach to call a timeout as their lead shortened to 23-19.

Rough service receiving by Lane and lots of kills by Loyola’s front row resulted in a first set defeat for Lane 25-20.

As the second set began Lane kept up with Loyola’s consistent offense with multiple ups by their back row passers making it a 5-5 tie.

Long rallies kept the game close until the Ramblers came back with a block, changing the pace of the game for them and increasing their lead to 15-13.

Loyola ended the game with strong kills and a uniform defense, handing Lane the defeat, 25-16.

Despite losing the season opener, Lane still is confident about this season, as they hope to continue to grow this young team.

“Every other school graduated maybe one or two [seniors], so they’re pretty much set, and every school in the city has already said ‘Oh, Lane Tech is not going to do this cause they have to rebuild their program,’” said Coach Lopez during the second week of practice.

Two sophomores, Simone McKenzie, Div. 271, and Chloe Smith, Div. 256, made the jump from the freshman team and already have impressed both coaches and fellow players with their defensive skills.

To get to the varsity level, McKenzie and Smith worked through the offseason to hone their skills.

“During summer I had a lot of private camps and I played with a ton of girls that were from Marist and McAuley to see how they played,” McKenzie said.

Smith said that playing with the upperclassmen is better preparing her for playing varsity.

“When I play against harder teams, I’ll feel more comfortable because it’s like I’m experiencing it at practice too,” Smith said.

The team has lots of new talent, but the veterans on the team, who already have played at the highest level, will bring experience to the roster.

“That was the first time they had made it to the regional championship in a long time,” Coach Lopez said. “And I felt like that’s just the beginning. I know that from there we can build.”

Middle hitters Webb and Mia McDermott, Div. 053, outside and right side hitter Julia Filimowicz, Div. 060, and Kulovitz are seniors who will be returning with varsity experience. Kulovitz took first-team all-conference honors in the top CPS conference last year and said she thinks that this team has potential, especially defensively.

“Based on our first week of practice we have good connections already between our setters and hitters, and our defense is insane,” said Kulovitz.

Junior middle hitter Elle Munds, Div. 176, also has high hopes for Lane this season. She expressed that she has seen strong hits and good passing in practice.

The team is especially confident in their defense this year.

“We definitely have potential defensively because we’re not a super tall team,” said Emilia Olender, Div. 077, who is a senior setter and right-side hitter.

The team will look to improve their record against Fenwick on Sept. 4 before hitting the road for the first time this season against Whitney Young on Sept. 5.