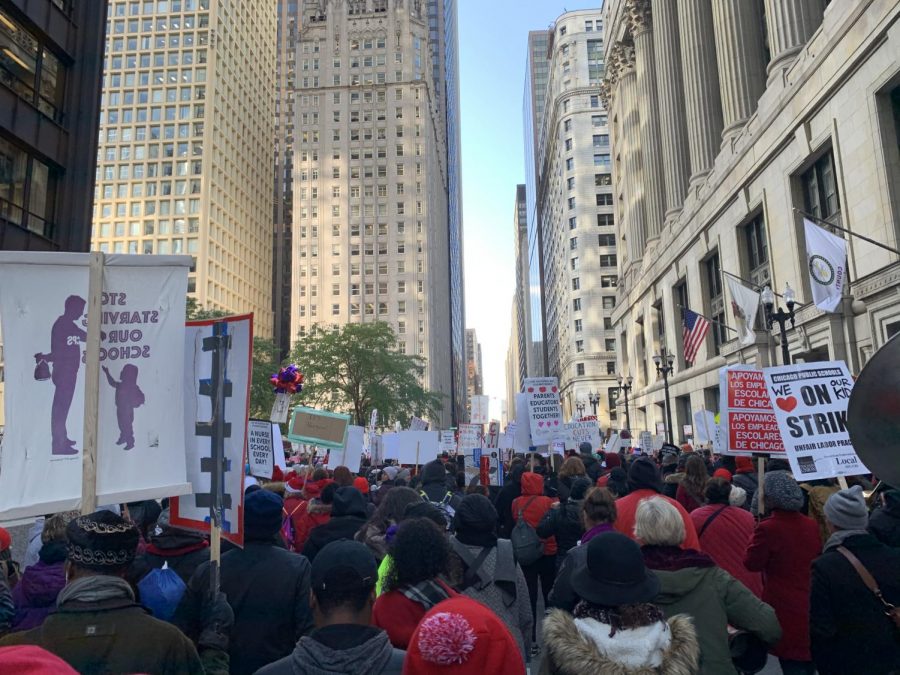 At 8 o’clock Wednesday morning, hundreds of CTU members from the North Side gathered at the Swissotel in downtown Chicago. From there, with over 30,000 additional CTU and SEIU members, they converged on the Thompson Center and City Hall, where Mayor Lightfoot delivered the first budget address of her term.

The address, which Lightfoot described as “a values statement for what we prioritize and the kind of city we want to be,” laid out her plan to close the city’s $835 million deficit without raising property taxes. Instead, she plans to fill this gap with increased rideshare and dining taxes and reimbursement from the state for ambulance services, as well as other savings brought about by zero-based budgeting.

Though Lightfoot did not specifically speak to any of the CTU’s top three issues — smaller class sizes, fair pay and benefits, fully staffed schools — she may have alluded to their fourth concern — school community justice — in describing the city’s plan to “increase funding for homelessness prevention by 36 percent,” according to the address, resulting in $10 million dedicated to affordable and supportive housing.

This budget item may be indicative of a larger trend: though Lightfoot, CPS and the CTU agree that certain investments are necessary, the former will not put their promises into a contract.

This friction is most apparent in staffing negotiations.

Though the CPS offer, released Sept. 30 and last updated Oct. 24, promises to add at least 200 more social worker positions and have a nurse in every school by 2024, as well as increase the number of special education case manager positions at schools with high numbers of diverse learners, Lightfoot has not written these items into a contract, which would provide avenues for legal action if the standards were not upheld.

In addition to strict and enforceable limits and ratios possibly hampering individual school’s ability to best provide for its students, CPS cites infringing upon principal discretion as reasons to not make these promises legally enforceable.

“We serve a diverse city with a varied set of needs. Schools in higher need neighborhoods may need multiple social workers and other support staff while other schools may need less,” the offer says. “Staffing limits set by the collective bargaining agreement would require principals to dedicate large portions of their budgets to hiring staff as mandated by the contract, not by the needs and desires of the local community or school.”

The offer continues that opening too many positions too quickly could “exacerbate the very inequities we all seek to address, creating even more vacancies in the highest-needs schools” because “new postings in areas of the city less challenged by poverty and crime have tended to pull teachers and staff from schools in high need areas.”

In addition to this, CPS claims that “even if CPS could realistically afford such a commitment [hiring 3,000 employees over two years, costing over $800 million], it would be nearly impossible to meet those hiring goals.”

This, paired with Lightfoot’s Monday claim that there is no money available to satisfy teacher demands, was one factor spurring the CTU and SEIU budget rally.

In a Tuesday visit to the Lane picket line, Nettelhorst 1st grade teacher and member of the CTU bargaining team Michelle Gunderson described Monday’s bargaining talks and reiterated this point.

“About mid-afternoon, you could tell that [Lightfoot’s] negotiating team and her lawyers had gotten a phone call, because pretty much they pushed a piece of paper across the table and said ‘That’s it. The end. No more money. Done,’” Gunderson said. “And in essence in bargaining, that’s take it or leave it, and all of us, all 40 of us on the bargaining team, said, ‘We leave it’ and we’re going back into the streets.”

According to Noah Tomko-Jones, Div. 190, the needs of CPS schools are less varied than CPS and Lightfoot portray.

“I mean, every student gets sick, right? Everybody needs a nurse. So many students, especially now, have traumas and anxieties that they need to talk to a psychologist about,” Tomko-Jones said. “There’s so many personal issues that need attention, and obviously most teachers are willing to help their students to the best of their ability, but they only have so many capabilities, and I think it’s unfair to expect that teachers not just teach, but are psychologists and are everything for their students.”

Ms. Marino, a Lane math teacher, agrees. She taught at Wells High School — a primarily black school located on Chicago’s Near Northwest Side — for fifteen years before coming to Lane and says that because of the school’s lack of proper social worker, psychologist and counselor staffing, her job consisted of both teaching and social-emotional support.

“You kind of do it all. You had the kids that came in and gave you a hug every day because they didn’t get that at home,” Marino said. “You knew the kids that — it’s understandable, that they [teachers] don’t want contact with students — but there are kids who needed that attention from an adult because they weren’t getting that at home.”

Before Lane’s principal, Mr. Tennison, hired a second social worker at the beginning of last school year, Mr. Cox says the poor staffing at Lane resulted in his having to prioritize how he divided his time among students.

“A lot of kids kind of were under the radar, so to speak. Students that needed attention just simply weren’t getting it. That’s the only way to say it,” Cox said. “That’s the effects [of prioritizing], so students were coming to school everyday having to deal with traumas and disruptions in their lives and serious mental health issues that just never came out.”

According to Mr. Rummelhoff, a Lane math teacher, if Lightfoot’s budget is accurate in its projected revenues, writing her promises into a contract should not cause monetary concern.

As of Thursday, Oct. 24, the district “has made more than 80 updates to the proposed contract based on requests from the Chicago Teachers Union” and continues to “work around the clock to reach an agreement that will allow classes to resume,” according to CPS.

The district’s latest offer, updated Thursday, Oct. 24, includes promises to staff full-time nurses and social workers in every school, beginning with those with the highest demonstrated need; “increase staffing levels in bilingual and special education to support English Learner and diverse learner student populations;” and “staff a librarian, restorative justice coordinator, or other position of the school’s choice at high-need schools.”

Though Friday’s negotiations have not yet taken place, the CTU has reportedly planned a rally at Union Park on Saturday morning, meaning the work stoppage could last into Sunday.