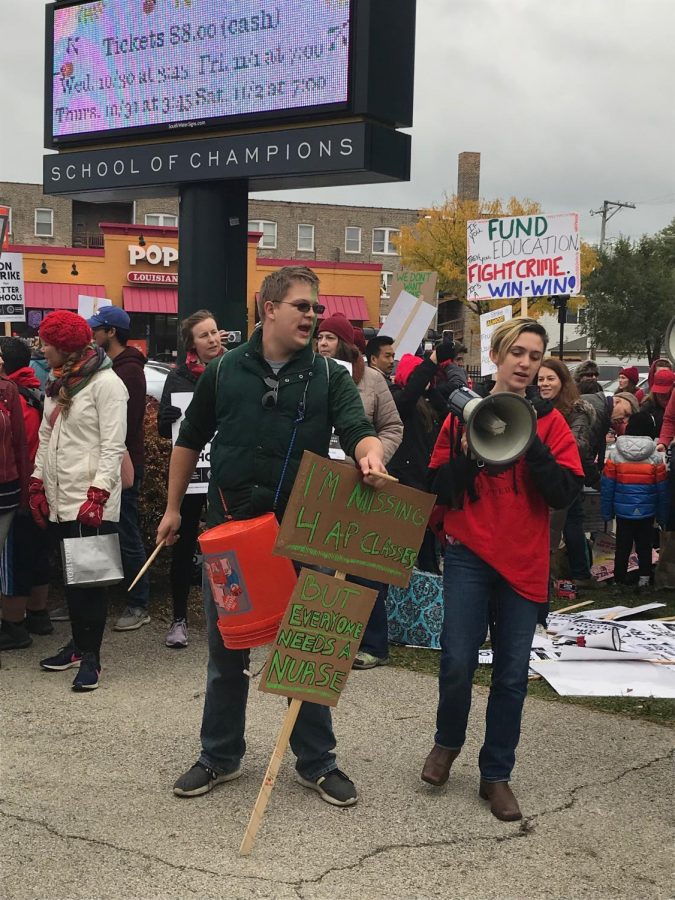 Lane students gathered at Western and Addison on Oct. 25 to show support for the CTU and SEIU strike. Students brought signs, led chants and played on drums as they walked the picket line.

Friday night, CTU President Jesse Sharkey said in a press conference that bargaining between CPS and CTU now primarily concerns the issues most important to the latter party: smaller class sizes, fair pay and benefits, fully staffed schools, and school community justice. This may have contributed to the talks’ slow progress.

“I don’t have any critical breakthroughs, but I think we’re at a point in bargaining where there’s not a huge number of issues, but it’s the important issues and the things we need to be talking about,” Sharkey said. “Hopefully we can get over the hump, but I will say that it still requires and is gonna still require some will from the political leadership of the city.”

At 7:45 a.m. at the Lane picket line on Friday, Sharkey delivered a press conference concerning recent strides made in CPS-CTU bargaining.

Though claiming “there was some good progress at the bargaining table [on Thursday night]” which could possibly lead to a contract, Sharkey was cautious to emphasize that the “resolve of our union, the public, the parents and the City of Chicago is undiminished.”

According to Sharkey, enforceable class size caps are among the lingering issues in negotiations.

“We need to get a little more progress on what happens if they don’t meet those [staffing] goals, that is an enforcement mechanism,” Sharkey said. “We have to make sure that we have something in the contract that reassures our members, who are in these schools, that what they say they’re going to do is really going to happen.”

After Rodriguez spoke, Sharkey reiterated the CTU’s solidarity with SEIU, calling the unions’ relationship “extremely important to the strike and to the struggle that we’re fighting for.”

Sharkey continued, “We have some basic demands around what equity looks like for people who make poverty wages. That’s an important part of our demands, and we intend to walk back into schools together.”

The CTU’s promise to return to work with SEIU may potentially delay an end to the collective work stoppage: Oct. 21 was the first meeting between SEIU and CPS after the strike began on Oct. 17. The meeting reportedly lasted only 12 minutes, and it is unclear which party cut the meeting short.

According to the Chicago Tribune, Lightfoot’s response claimed the letter “omitted many important facts regarding the negotiations” and cited the district’s offer to raise SEIU workers’ salaries by 16 percent in five years, the same pay increase offered to the Teachers Union.

The SEIU press release available later on Oct. 24 states that “most [SEIU members] are low-wage workers living paycheck to paycheck, with many — especially bus aides — working second or third jobs to make ends meet. Over half of CPS support staff make less than $35,360,” meaning that the offered pay increase, while equal, would not be equitable.

At a joint CTU-SEIU rally at Union Park on Saturday morning, Sharkey spoke with a seemingly renewed commitment to end the work stoppage with a fair contract.

SEIU and CTU members’ reported plan to wear purple in support of SEIU on Monday, as well as slow progress in SEIU-CPS bargaining, indicate that the work stoppage could last until then.

On Friday at 9 a.m., about an hour after Sharkey’s press conference, around three dozen Lane students gathered to show support for teachers and other staff members.

According to one of the student organizers, Xavier Fraid, Div. 162, the rally, which included chanting, singing and drumming, was political as well as social.

“I think a lot of students here have the politics in mind and are here actively supporting the teachers along with us, but I also know that there’s a lot of students who’d rather not get involved in politics and that’s okay,” Fraid said. “We’re just trying to bring the student community at Lane closer together, for political reasons or to just see your friends that you haven’t seen in a week.”