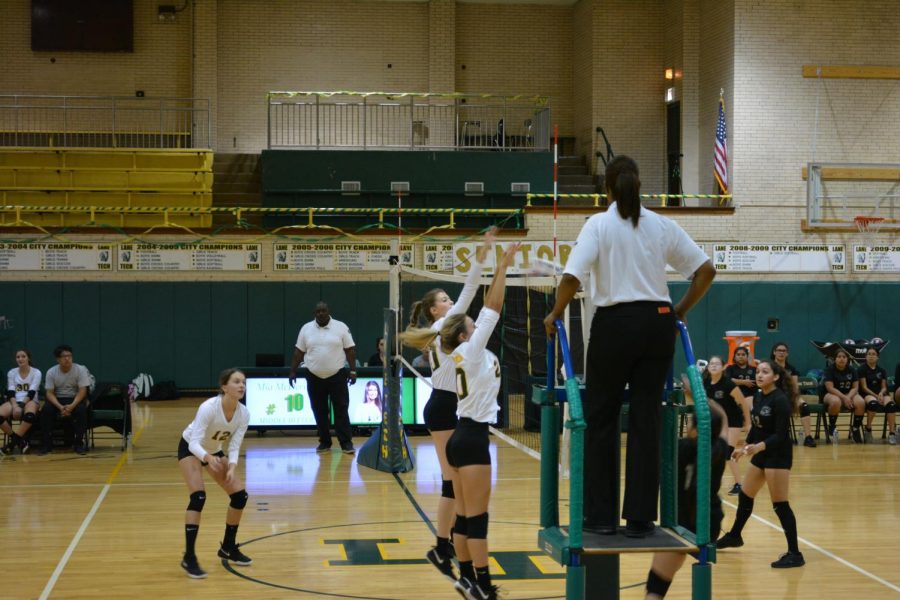 The Girls Volleyball Team pictured at their city championship game against Payton on October 12. Girls Volleyball's season was affected when IHSA deemed them ineligible to compete in state playoffs.

Many high school athletes around the country dream of making a big play or setting a PR in the state championships. Some get their opportunity to shine. For others, they don’t cross the finish line in time.

But, across Lane Tech athletics, many athletes were denied the chance to finish their state playoffs due to the 11-day Chicago Teachers Union (CTU) strike.

Six Lane teams were not eligible to compete in the Illinois High School Association (IHSA) state series, due to IHSA rules and regulations.

The soccer team, fresh off of a city championship victory, was hoping for a long run in the state playoffs. IHSA rules deemed all CPS soccer teams ineligible, and they were not able to compete. IHSA declined an appeal hearing from the soccer teams on October 21.

“It was very disappointing because this year we won city and we built up all this confidence and we thought we actually had a really good chance to compete against these suburban teams that are really good,” said senior goalkeeper Jacob Bozek, Div. 080.

“We are all really upset. We were all looking forward to state and worked hard all year to get there so when we were told we couldn’t play everyone was shocked,” senior outside hitter Ruby Kulovitz, Div. 072, said.

“The final practice was to, I don’t know, enjoy some more volleyball until it was all said and done. We wanted to be able to say goodbye to the season the right way,” Coach Lopez said.

The girls’ golf team qualified a golfer for state, but Noel Feller, Div. 152,  was not able to compete due to the timing of the strike. Feller, like other all other athletes, was not able to contact her coach over the strike to do strict strike rules,.

“My coach is telling me, ‘Oh, there might be a strike, and that might mean I can’t go with you, which means you can’t go,’” Feller said.

“It’s not like my athleticism is coming from my coach,” Feller said. “It’s coming from me, so I didn’t know why I needed to compete with that coach specifically.”

The boys’ golf team also had to forfeit a state golf qualifier. Junior Ian Flores was coming off a great round at sectionals but was unable to compete at state. His head coach, Robert Hirsch, felt very bad for Ian.

“He was the only boy from CPS to qualify for state this year, and to not be able to see him play at State was an abrupt ending to the golf season,” Hirsch said.

The girls’ tennis team was slated to compete in sectionals to attempt to get team members into the state tournament. However, like many other teams, they were denied the opportunity to do so.

Many Lane teams were affected by the strike, but even for teams that did not qualify for state, the cancellation of the end of their season was disappointing.

The football team did not qualify for the state playoffs. However, due to the strike, the had to cancel their final regular-season game against Al Raby.

“I was extremely disappointed because not only was it my last game, it was also our senior night game and that’s a game that some kids wait for their whole lives and throughout high school,” senior defensive back and wide receiver Leo Rosenfeld, Div. 080, said. “It’s a really big game, so, I don’t know, I just wish that we could have played in it.”

The girls swimming and diving team is still hoping for a state playoff run. Their season runs later into November. However, they had to have two weeks with no official practices (some teams still practiced without coaches), which hurts teams tremendously.

So, as the lights at Lane Stadium shut off, and the season switches to winter sports, many Lane athletes are left wondering, what could have been.