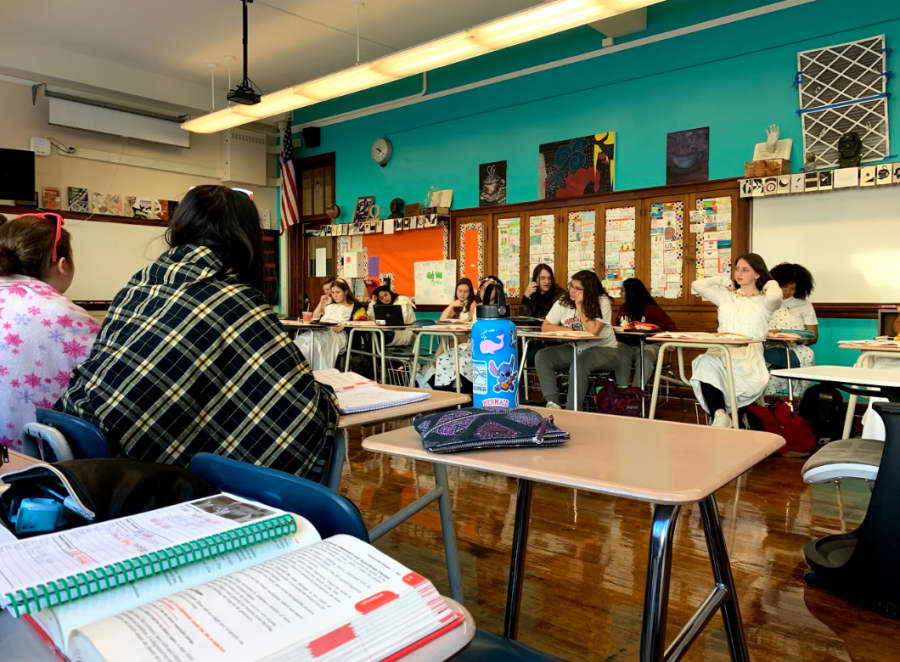 “The Omega kids I've seen have gotten to be a family. They got to really bond, they stick together, they care for one another and I think that's great,” Stepek said.

“Pomp and circumstance” will be blaring as students march out in their graduation gowns on the biggest day of their high school careers. In addition to the usual medals and colored stoles hanging around student’s necks, sixty of the graduating students will be adorned with an Omega medal.

Omega was introduced to Lane four years ago when Mr. Telles, an English teacher, decided to create the program. Mr. Telles planned to teach the first Omega freshman English I class, while Mr. Stepek would be teaching the first Omega social studies class. Now, four years later the inaugural class will be graduating.

According to the Omega website, the goal of the Omega program is to create a cross-curricular course of study for students so they can focus on humanities and literature.

To become a part of the program, students have to complete an application and have a total score of 850 on their high school entrance application. The Omega application includes questions about a student’s passion for the humanities as well as a short response writing prompt.

During its four years, the program has added features to make students more prepared for their lives after high school.

The goal of Omega is to create new leaders for society and plan to do so by proudly helping the community via “Omega moves,” according to the Omega website.

The Omega Day of Service, established earlier this year, is an example of new strides the program is taking to make “Omega moves,” according to the Omega Istoria website.

Students volunteered at six locations around Chicagoland during their day of service last May. The locations included Book Bank, a book donation center, and Feed My Starving Children, a food donation center.

All of the Omega teachers joined students at their volunteer locations including Mr. Stepek, who has been part of the Omega program since its first year. Mr. Stepek said he wanted to join the program because he hadn’t seen enough representation for students who enjoy English and Social Studies as far as the programs offered at Lane went.

“I thought it would be a really neat idea to be involved in a program that was focused more on the humanities and where we would do cross-curricular instruction,” Stepek said. “I think there’s a lot of things that we learn from literature.”

As Omega has grown as a program, it no longer exclusively connect students’ Social Science and English classes, but it also requires students to take two humanities electives one during their junior year and another during their senior year.

Oscar Zetino, Div. 079, has been in the Omega program since its inaugural year. He said he applied because the program seemed like something that was specifically geared toward the subjects he was inclined to, English and Social Science.

Zetino, a member of the Omega student council, said that he can’t wait to see how the program will continue to grow and change in the future just as it has during his time at Lane.

The experience of being a part of something so big and meaningful is astounding, Zetino said.

“The Omega kids I’ve seen have gotten to be a family. They got to really bond, they stick together, they care for one another and I think that’s great,” Stepek said.

As the years have gone by and the Class of 2020 have grown into seniors, they have grown as Omega students as well, according to Zetino.

“Omega has definitely changed a lot of how I look at the world. Along with my debate class, Omega has introduced me to many different theories about economics, politics, and philosophy that I would have never engaged with otherwise,” Zetino said. “The different perspectives and lives I’ve encountered in Omega have informed me so much about the different lives people live in this city, moving me outside of my bubble.”

As this year marks the program’s inaugural class, this will be the first time Omega teachers will see their students off to college.

Mr. Stepek said that the graduation of these students will be bittersweet for him.

Zetino said that as he looks back on his time in the program and forward at his future he feels that Omega has shaped a lot of who he is and what he will be.

“I want to take the part of our motto about being a model citizen with me everywhere. We still need to work on installing those values into our kids,” Zetino said. “But I know how important it is to be an active citizen, so I want to keep teaching others to be active in their lives politically and to take control of their lives.”