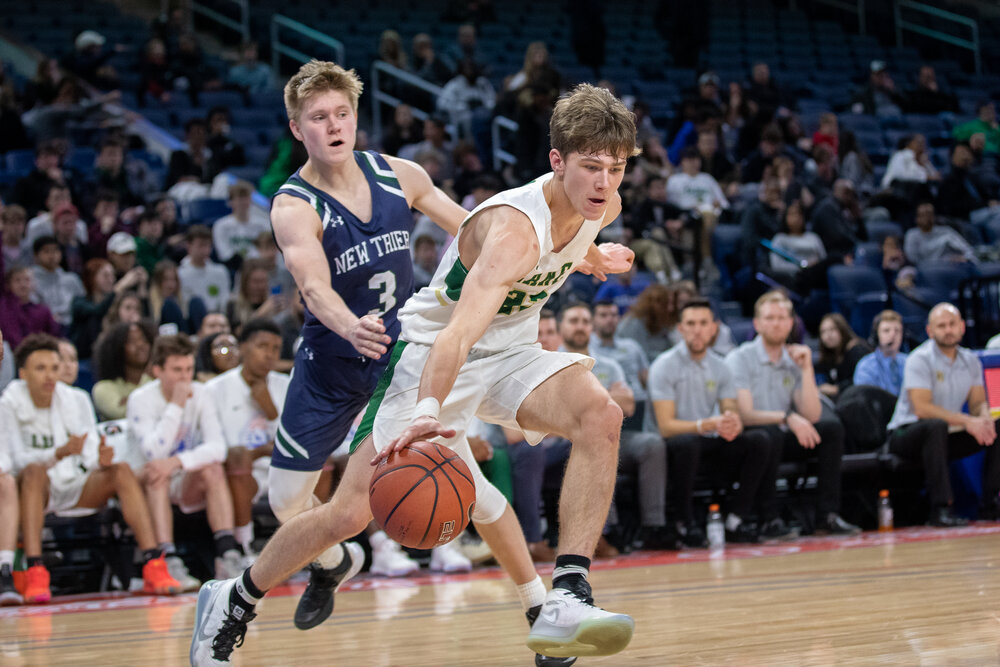 The Boys Varsity Basketball team will take on Saint Joseph High School at 4:00 p.m. on Dec. 26 at the Proviso West Holiday Tournament.

With a victorious debut on Dec. 6 in the 2019 Chicago Elite Classic against New Trier, 57-47, the Varsity Boys Basketball team continues their season in the Red North-West conference with multiple invitations to some of the most premier high school basketball events in the nation.

Following the Battle of the Bridge tournament in Nov., the team was nearing their showcase in the eighth annual Chicago Elite Classic, CEC, with a 2-3 record after facing multiple top teams within the Chicagoland area. Head Coach Nicholas LoGalbo expressed how the Thanksgiving tournament progressed throughout Lane history.

“You know it started actually when I was a student here twenty-some odd years ago, and it evolved into the Battle of the Bridge and we started co-hosting with DePaul a couple years ago,” LoGalbo said. “Three of the eight teams were in the top 25 to start the season and we played two of those teams and obviously we won our first two games.”

Lane placed fourth in the tournament with wins against Jones and Lake View, and losses against Notre Dame, Niles North and North Lawndale. Despite the three consecutive losses, guard Rashad Harries, Div. 070, felt optimistic before facing New Trier on Dec. 6.

“There’s been a few ups and downs, but as a team we know we got to get over those humps,” Harries said. “We’re taking it step-by-step. We’ve got a lot of new guys that are coming out to the squad so we’re trying to get them and just holding a high standard is going to help us succeed.”

Entering the game against Lane, New Trier had a record of 2-2, according to MaxPreps. The Trevians had won against Butler by 42 points and Senn by 50 points, causing Lane to question how to defend their offensive power. Harries believed to ensure the victory Lane just had to stick to their way of playing and limit New Trier offensively.

Lane stuck to that game plan Dec. 6 as they dominated offensively and defensively over New Trier the entire game. Guard Justin Brown, Div. 180, began the momentum in the first quarter with three back-to-back three point shots.

Forward Louis Perona, Div. 068, emphasized how staying true to the team’s strengths on both ends of the court was key to a successful first half.

“They were hitting a few shots, but we were just so confident,” Perona said. “We were running our press. We would just get the ball in transition and go if we could and if not, they were in man in the beginning of the game and then we just were slicing it up.”

Consistent offense and a tough defense by Lane led to their six point lead at half time resulting in a score of 32-26.

After the first half, the Indians did not slow down, allowing New Trier to add only eight points in the third quarter prompting both Coach LoGalbo and Coach Scott Fricke to substitute in their bench at the start of the fourth.

Much of the fourth quarter consisted of multiple turnovers by the Indians and Trevians, but an increase in offensive power by New Trier allowed them to put up another 14 points.

Despite New Trier’s attempt to get more shots off, Lane’s amount of possessions off rebounding and steals did not allow them to decrease the ten point deficient. Center Cleveland Jones, Div. 052, shut down their momentum with a clean block late in the fourth securing the 57-47 victory.

The Chicago Elite Classic showcases multiple nationally ranked teams throughout the country and attracts over 13,500 fans annually, according to the CEC. LoGalbo shared some insight on the importance of these national high school basketball events this year specifically.

“Nike is completely sponsoring the event and this year with the All-Star game being in Chicago, this is Nike’s kickoff event to all basketball festivities in Chicago this year,” LoGalbo said. “This is like the first thing and then everything else that comes after this and up until the All-Star game Nike Chicago is going to be behind, so it’s a really high profile event for us.”

Following their success in the CEC, Lane faced Mather, 58-48, and Chicago Marshall, 54-51, where they began their longest win streak of three-games. This streak came to an end when the team faced Farragut, 61-50, adding a loss in their conference record, 1-2. Lane loss another close game against Brother Rice on Dec. 14, 61-60, but will have a chance to improve their conference record against Uplift Dec. 18.

The basketball team will continue competing in the Red North-West Conference, and this year, they’ll also be playing in the D-Rose Shootout.

The Boys Varsity Basketball team will continue their attendance in national high school events on Dec. 26 in the Proviso West Holiday Tournament, PWHT, facing teams such as, Crete-Monee, Hyde Park Academy, Uplift and Whitney Young. This tournament will be filled with exciting players who are projected to be high major NCAA Division I athletes, according to the PWHT.