One win at a time: Mr. LoGalbo coaches his way into the record books 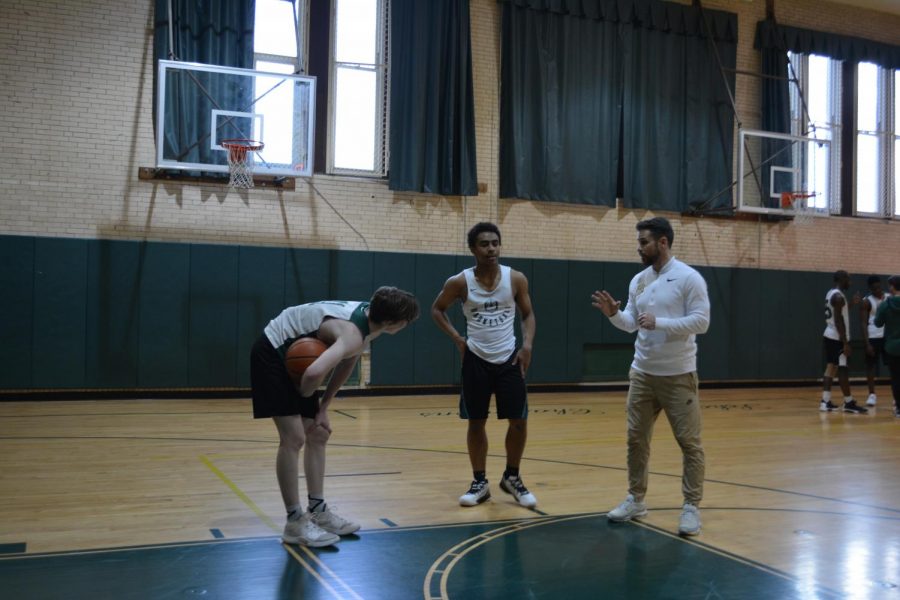 Mr. LoGalbo coaches players on their technique during a Boys Basketball practice.

Lane Tech Boys Basketball head coach Nicholas LoGalbo was getting ready for another conference game on Jan. 8 when he was told to go to the front of the line for the national anthem.

“That night, I know a lot of people know now, but my wife and I were expecting our third child, and Coach Hamel told me to get to the front of the anthem,” Logalbo said. “And I’m like ‘something weird is going on.’”

“I thought that we’re going to do a gender reveal of our baby, I thought my wife was going to come out of the stands. I’m like, ‘This isn’t the time or place for that,’” LoGalbo said.

LoGalbo, who has been coaching with Lane for 15 years and has been the head coach for 12 years, was just a little off in his guess. He was being honored for becoming second all-time for head coaching wins in Lane basketball history.

After Lane won their opening night game this season against Lake View, LoGalbo passed Ken Olson, who coached at Lane from 1971 to 1986, with his 144th career win. He reached win number 150 against Northside on Dec. 19 and was up to 153 by the time he was honored before the Payton vs. Lane game.

LoGalbo, who graduated from Lane in 2001, returned just four years later as a student-teacher.

“He walked through these halls as a student. He went through the same experiences our guys are going through now, so he can really relate to the stress that they are under and the expectations that they have placed upon them,” said math teacher and assistant varsity coach Mark Hamel, who has worked directly with LoGalbo for two years.

Hamel went on to say that LoGalbo always puts the kids first.

“He really just cares about helping our players grow into men and become the best people they can be,” Hamel said.

LoGalbo used basketball as a platform to help develop the players, both on and off the court.

“The best part, and the reason that I’ve been doing it for 15 years, is just obviously getting to use my passion, which is the game, to connect with young men and help them become better people through the sport,” LoGalbo said.

However, some wins along the way always make the job a little sweeter.

“After our big wins when we go into the locker room, and all of us coaches usually talk in the hall first, and then LoGalbo will walk in [to the locker room]. And just seeing him get mobbed by the players in celebration. You know, [those are the] times you know how much they appreciate him and he’s able to let loose because we just got that big victory,” Hamel said.

His players feel the passion that LoGalbo puts into developing their skills. Senior captain Rashad Harries, Div. 070, has been on varsity for two years.

“He holds everyone to a standard. He never lets his guard down, he never lets emotions take over what he’s trying to do. He continues to be confident in his players and keeps us going strong,” Harries said.

After Coach LoGalbo returned to Lane, he took a quick path up the coaching ranks with the Boys basketball program, going from the head freshman coach to head varsity coach in just a couple of years.

Now, during a memorable 12th season, Lane has enjoyed success.

One game that really stood out to Logalbo this season was the Whitney vs. Lane game on January 22.

“You know we ended up missing some shots, they ended up making some shots down the stretch that separated it a little bit, but you know we’re going up there playing against the best in the state,” LoGalbo said. “We’re giving our best punch and we’re right there and we see them, trying to make adjustments and trying to figure out a way to score, it shows that we’re getting there.”

LoGalbo insists he is not caught up with records, but the current record for head coaching wins with the boys basketball program is 264, held by Ray Umbright, Lane’s head coach from 1919-1954.

“I don’t see myself going anywhere anytime soon,” LoGalbo said. “My dream is to be here for my kids to come here, one day coach my son, be here with my daughters playing, you know that’s a dream. With that being said, my son is 3, so I’ll be here for a while. Hopefully, we can just put the ball in the basket, keeping this thing rolling.”