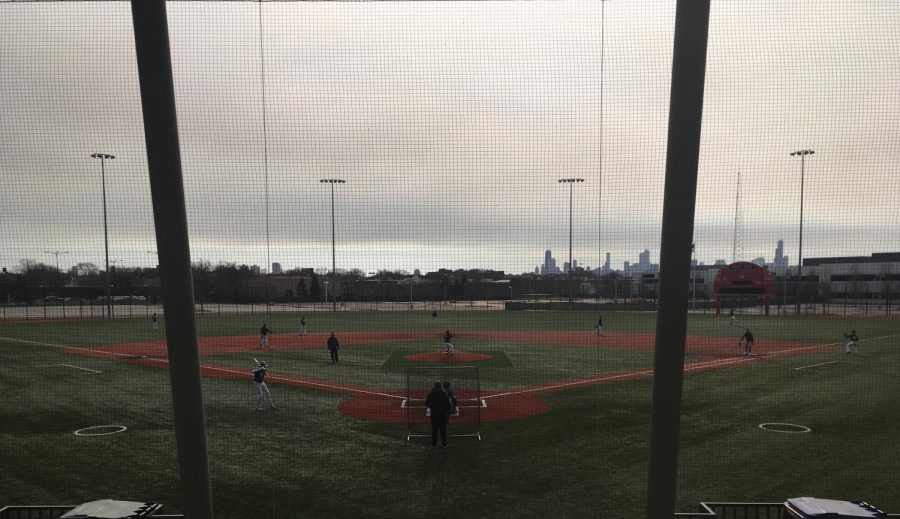 All athletic teams, including the baseball team, had their seasons suspended March 12.

As schools state-wide get prepared for school cancellations, coaches of winter and spring sports are left powerless amidst the COVID-19 outbreak.

“I just got the main email from CPS that everyone received yesterday,” Boys Track and Field coach Kris Roof said. “And then our athletic director emailed us coaches saying that we can’t have any organized practices moving forward and then today they told me they were canceling our meets up through April 12.”

On Thursday, Mar. 12, CPS officials announced that “Per district guidelines, all sports competitions and practices including CPS SCORE are suspended until further notice,” on the official CPS website. This came after an original message had only canceled competitions, not practices.

“[No practice is] definitely going to hurt them,” Roof said. “The good thing is we have a very strong team this year and very good leaders, juniors and seniors. And so the varsity athletes, I know that we will give them workouts and they will do what they can provided the health and safety [of the student-athletes].”

After Illinois governor J.B. Pritzker ordered all schools close on Friday, Mar. 13, CPS ensured that athletics will be canceled through at least Monday, March 30, the day before students are currently set to return.

A timetable of whether CPS athletics or Illinois High School Athletics (IHSA) will be canceled for the rest of the spring is still yet to be announced.

“I cannot predict what will happen to athletics this year as you can imagine this is well beyond our building,” Principal Brian Tennison said. “These are national, state, and city public health decisions that are being made… We will all get through this together as a community.”

“While I understand that this is a bigger issue than sports, I can’t help but feel disappointed for all of our players and kids across the state that have worked so hard all off-season,” Baseball head coach Sean Freeman said. “I’m glad the IHSA has not rushed to make any decisions to cancel the season at this time, and we remain hopeful that we will be allowed to compete later this spring.”

Teams are still hoping to be able to compete in later season events, as the situation has been changing lots over the past days.

“I know the situation’s changing every moment and so I’m anticipating there to be more changes. Possibly a cancellation of the whole season,” Roof said.

The boys track and field team is hoping that they will be able to come back later in the season when the virus is more under control and compete the rest of the school year.

“I can just hope and wish for the best and hope that we come back in April and get to finish our season. Go to state. Win state,” Roof said.

This is the second time that Lane and CPS athletic teams have been affected on a major scale this school year. An eleven-day teacher walkout in October ruined the fortunes for many fall teams. Now spring teams are facing similar situations.

Other than the strike earlier this year, Coach Roof has never seen a situation like this in his 18 years coaching with this boys track and field team, 17 of which have been as head coach.

“This is kind of unprecedented,” Roof said. “I think it’s a first for everybody.”

After advancing from the regional three-point contest at Lane, Kensik and Harries were set to continue their road to the state finals in the contest at Lyons Township High School during sectionals. The competition got canceled along with the rest of the sports and activities.

“I was really surprised— frustrated— because it was canceled randomly without much notice given,” Kensik said. “I feel even worse for seniors who aren’t given a last chance to compete.”

Now spring teams just have to wait and see when and if they will be able to practice in the future.

Until then, the field at Lane Stadium will stay empty and the turf at Kerry Wood Field will remain untouched.

This story is still developing and will be periodically updated.