The Lane Tech Champion • May 14, 2020 • https://lanetechchampion.org/9977/sports/former-boston-college-nfl-player-dedrick-dewalt-hired-as-head-football-coach/ 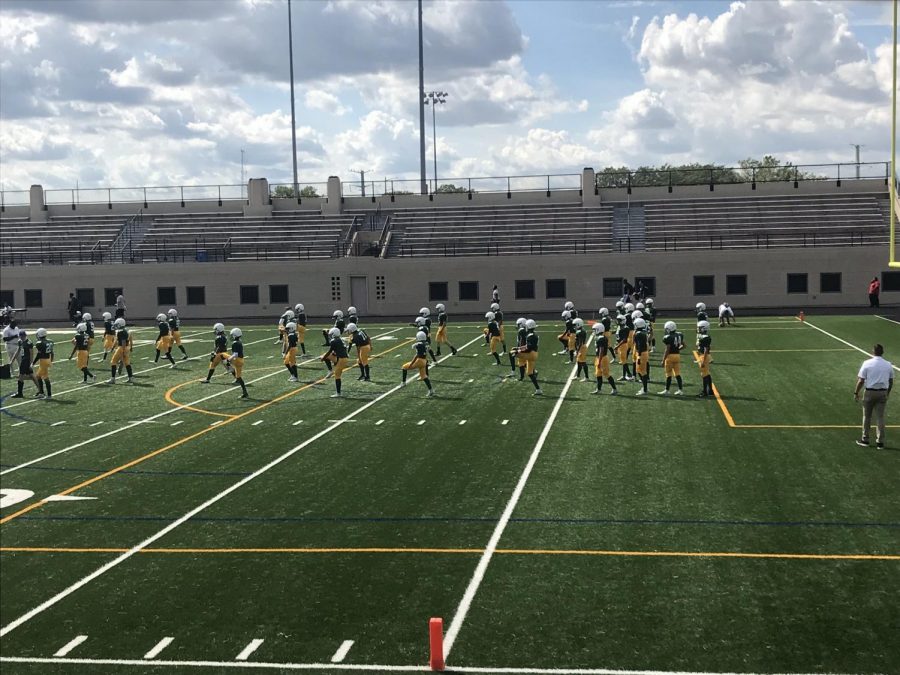 Dedrick Dewalt, a CPS grad as well as an experienced coach and former NFL player, has officially been signed to take over the Lane Tech football program. This move comes following Anthony Faltin leaving the head coaching position at Lane after a five-year tenure with the team.

After graduating from Simeon, where he was all-state selection as a junior and senior, Dewalt went on to play four years of football at Boston College as a wide receiver under a full athletic scholarship.

Dewalt started eight games his freshman year with Boston College, and eleven games each of his final three seasons. He had 19 touchdowns and 126 receptions during his time in Boston, according to sports-reference.com.

After his college career, Dewalt was able to make the jump to the National Football League.

According to the Lane Tech athletics website, Dewalt has most recently coached at North Lawndale High School in Chicago, among other programs in Indiana.

This came after Dewalt started his coaching career at his former school, Simeon, one of the Chicago Public League powerhouses.

The process to select a head coach was altered from past coaching searches, with stay-at-home orders in Illinois not allowing for in-person interviews to be conducted.

“This was [a] very unique [process],” athletic director Nicholas LoGalbo said. “We had applicants fill out a questionnaire and then conducted first and second round zoom interviews.”

Even though the process was done online, the school was confident in Dewalt taking over the program, and Dewalt is ready to get to work at Lane Stadium when it is allowed again.

“We all loved his passion for working with our youth and using football as a tool to teach life lessons,”  LoGalbo said. “This belief was evident during the entire interview process.”

Dewalt is signed to a year by year contact with Lane principal Brian Tennison, like all Lane athletic coaches, according to LoGalbo.

Dewalt said he is excited to become the head coach of Lane’s historic football program.

“The thing that was most appealing about the football job was the tradition that this program represents,” he said. “I wanted to take on the challenge of bringing this once respected program back to prominence in the city of Chicago.”

Lane football is coming off a disappointing 2-6 season, with six straight losses to end the campaign. In the past two seasons, the team has combined to win only three games.

Faltin will step away from coaching after five years as head coach of Lane, which included a five-win season back in 2017.

“[Faltin] has a growing family and felt it was time to step away,” LoGalbo said.

“Coach Faltin was very focused on procedure and safety of his student athletes,” LoGalbo said. “I have never been around a coach that was that focused on the student’s safety first, and that is already something that we made clear to all of our applicants — that student athlete safety is paramount and a non-negotiable for us.”

Dewalt is looking to improve upon the foundation  Faltin built, and bring his past success to Lane.

“I have won and qualified for state with every program I have coached and [am] very excited to bring my knowledge and enthusiasm to Lane Tech,” Dewalt said.

But to achieve the success that Dewalt is eying, there are going to be some changes.

“The biggest change I would like to see at Lane Tech is the belief that we can compete with anyone in the city and state in the game of football,” said Dewalt. “The belief, consistency, discipline, will to win on and off the field are the major changes I would like to see. We will accomplish those things.”

The players on the field may not look that different this season, with Lane graduating only 14 of their 47 varsity players, but the sidelines and coaches’ box will have some new faces.

“I am bringing in my own coaching staff with hopes that some of last year’s coaching staff would join my staff,” Dewalt said, implying some of the current assistant coaches may not be coaching for Lane next season.

Logalbo said he believes that Dewalt will be able take this program further in the right direction.

“I think he will impart the right values and build on the great things Coach Faltin was able to do,” LoGalbo said.

Dewalt hopes to establish Lane as a powerhouse in Chicago and help players play at the next level.

“The overall big picture I would love for the Lane Tech Football program to be known for producing outstanding citizens off the field, students first, good football players on the field. Perennial state and city playoff qualifiers,” Dewalt said. “Last, my overall goal as a coach is to make sure that every student that plays in the Lane Tech program has an opportunity to play football at the next level in college.”